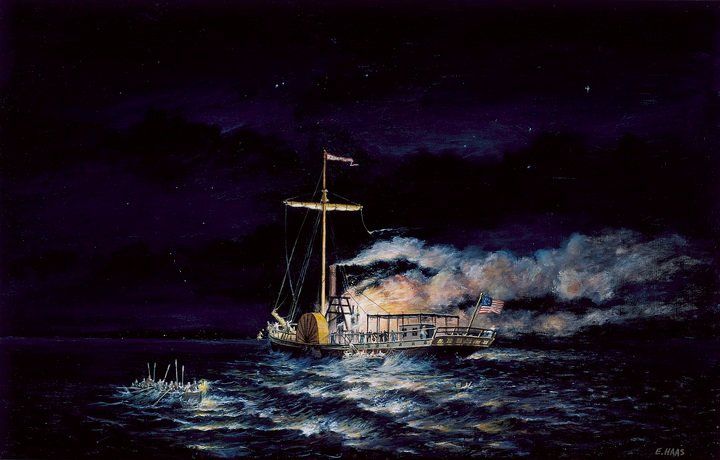 Montpelier, Vt. – The Division for Historic Preservation (VDHP) and Lake Champlain Maritime Museum announced the discovery of two paddlewheels, likely fragments of the Steamboat Phoenix, which caught fire and sank exactly 201 years ago today on September 4, 1819 on Lake Champlain.

This past weekend avocational diver Gary Lefebvre of Colchester identified some unusual wreckage off Colchester Shoal in Lake Champlain using a Remotely Operated Vehicle (ROV). Lefebvre brought footage of the discovery to the attention of Chris Sabick, Director of Research and Archaeology at Lake Champlain Maritime Museum, who identified the wreckage as the remains of one of two paddlewheels from an early steamboat. Based on the location, the style of construction, and the presence of extensive charring on the timbers, Sabick determined it is likely a paddlewheel from the Steamboat Phoenix. Acting on this assumption, a second reconnaissance with the ROV found another paddlewheel in the vicinity of the first. This second paddlewheel structure was identical to the first in construction and also displayed extensive charring on the surface of its timbers verifying that it came from the same vessel.

“Gary’s amazing discoveries bring one of the most tragic maritime accidents in Lake Champlain’s history into sharp focus in an entirely new and dramatic way,” said Sabick, “They also demonstrate that Lake Champlain still has many stories to tell and archaeological mysteries we can unravel.”

On the dark night of September 4, 1819, the Steamboat Phoenix was floating dead in the water north of Colchester Shoal and burning furiously. Passengers who were unable to board the lifeboats jumped into the water and clung to debris or swam for their lives. As the center of the vessel burned, the structures that support the guards and paddlewheels on either side of the steamboat began to fail. The paddlewheels tore loose and dropped to the bottom of Lake Champlain. The remaining hull burned to the waterline while slowly drifting south and eventually coming to rest on the shoal itself. Ice eventually dragged the charred hull remains partially off the shoal and deposited it where it now rests on the northern face of Colchester Shoal reef.

“We are grateful for shipwreck explorers like Gary Lefebvre and our partners at Lake Champlain Maritime Museum, who are essential to the identification and preservation of the nation’s maritime history,” said Laura V. Trieschmann, Vermont State Historic Preservation Officer.

The Steamboat Phoenix was the second commercial steamboat on Lake Champlain, built and commanded by Captain Jahaziel Sherman of Vergennes, VT. The shipwreck of the Phoenix is part of the Vermont Underwater Historic Preserves and is listed in the National Register of Historic Places.

About Vermont Agency of Commerce and Community Development:

About the Underwater Historic Preserves:

All underwater historic sites in Lake Champlain belong in public trust to the people of the respective states in whose water they lie. The Lake Champlain Underwater Historic Preserves, founded in 1982, provides public access for divers to some of the Lake’s historic shipwrecks. The Vermont Survey Archaeologist supervises the program with the aid of the Lake Champlain Maritime Museum, U.S. Coast Guard, Vermont State Archaeologist, State of New York officials, and a team of dedicated professionals who volunteer their expertise and time. Essential to the success of the program is the public partnership, with registered divers identifying and monitoring these preserves.

Founded in 1985 with the mission to preserve and share the cultural and natural heritage of the Lake Champlain region, Lake Champlain Maritime Museum is building a healthy future and community for Lake Champlain. Through education, exhibits and historic boats, research, and collections, the Museum connects people to the region’s history, ecology, and archaeology and creates opportunities for hands-on learning that will last a lifetime. Year-round education programs serve more than 2,500 K-12 students, as well as hundreds of educators locally and nationally. For more information, visit www.lcmm.org.