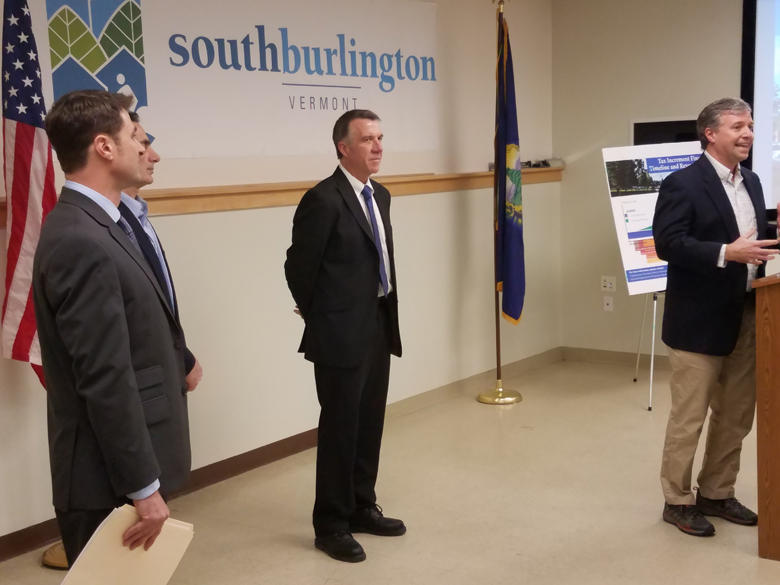 Private developers Chris Snyder and Ken Braverman will join forces with Cathedral Square, a non-profit affordable housing provider, to build new senior housing on Market Street. This is the first of many proposed projects located in South Burlington’s new City Center. South Burlington voters approved the creation of a TIF District in 2012 and in 2016 approved the resulting $5 million bond issue to upgrade Market Street with sidewalks, utilities and infrastructure to support more housing and commercial development and create Dumont Park.

“This project would not be possible without the use of tax increment financing. It is a valuable development tool for communities, like South Burlington, to use in revitalizing their downtowns and village centers,” said Gov. Scott. “Tax increment financing has demonstrated benefits to supporting the type of development projects we need to make housing more affordable for all.”

South Burlington is one of seven communities statewide that can use Tax Increment Financing. This financing mechanism allows communities to use future property tax dollars generated by private development that would not occur unless the municipality can build and improve public infrastructure to support new development. Current state law prohibits the creation of any more TIF districts. There is proposed legislation to lift the TIF cap, allowing more towns access to this tool.

“TIF’s enable public-private partnerships – local, state and federal government working collaboratively with private investment. In South Burlington, the outcome is the creation of much-needed housing and the public infrastructure to support growth and economic development. This translates into a stronger, more resilient and affordable Vermont,” added Gov. Scott.