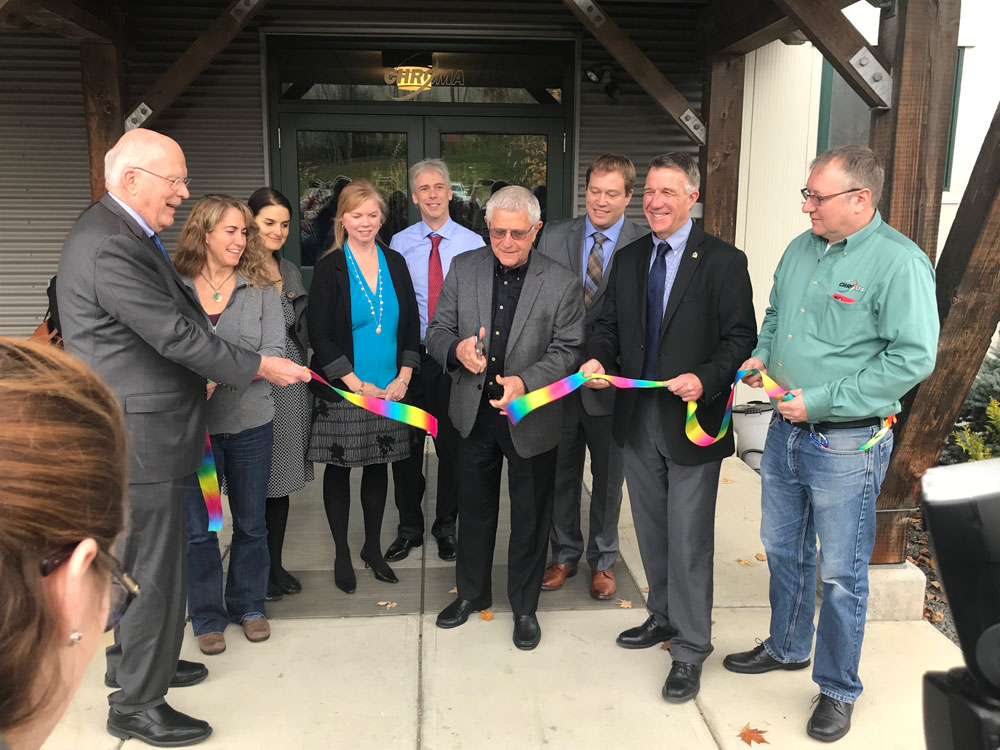 Bellows Falls, Vt. – Senator Patrick Leahy, Governor Phil Scott and local officials joined Paul Millman, president of employee-owned Chroma Technology Corp, to celebrate the completion of a $22 million expansion that will add or retain 133 jobs in Bellows Falls. The event concludes pre-development and construction at Chroma, and almost two years of work by Chroma, Brattleboro Development Credit Corporation (BDCC), the Agency of Commerce and Community Development (ACCD), the Vermont Economic Development Authority (VEDA) and the Town of Rockingham to ensure that the company expanded its business in Bellows Falls.

The event took place at the Chroma facility at 10 Imtec Lane and included a tour of the new expanded facility. In 2016, Chroma – a local optical filter manufacturer that distributes its product all over the world – was approved by the state of Vermont for a 37,000 square foot expansion to its facilities, adding about 25 new jobs as well as allowing Chroma to retain its existing 113 jobs in the region. Prior to the expansion, the growing manufacturer had been struggling to increase capacity in its existing space. Chroma is not only one of Rockingham’s largest employers but is an employee owned company, meaning every employee is a Chroma shareholder with a generous salary and benefit package.

To support Chroma staying in Bellows Falls, the BDCC provided critical regional project development leadership, spearheading the predevelopment and development efforts necessary to advance the project. Ultimately, leading the efforts to ensure adequate capital was available to support the expansion project, working with ACCD and Governor’s Office to facilitate funds for the project. Eventually, four different local and state funding sources were utilized: a loan from the Town of Rockingham, funding from the Windham County Economic Development Program, a grant from the Community Development Block Grant (CDBG) program and a loan from VEDA.

BDCC Executive Director Adam Grinold says his organization continues to successfully support businesses growth to replace the wages lost by the closure of the Vermont Yankee Nuclear Power Plant. “The BDCC understands the economic realities our rural Vermont businesses face each day – our team has developed the ability to support companies with their daily workforce and operational needs as well as facilitating large expansion projects such as the one we celebrate here today. We are committed to ensuring every employer who has the business to grow, has the resources to stay and grow here in Southern Vermont!”

“This project has been a team effort, combining federal, state and local resources to retain and create good jobs in Windham County,” said Governor Scott. “This public-private partnership will help strengthen Windham County’s economic future, which is so important as the region continues to feel the effects of losing Vermont Yankee jobs. As we work to grow our economy and create more opportunity for Vermonters, Chroma’s expansion demonstrates Vermont is indeed open for business and that we value and support our employers.”

“Being the leader in their field, Chroma had the opportunity to grow their company in many places. They chose to do so in Vermont,” said U.S. Senator Patrick Leahy. “As we celebrate their expansion I want to say thank you to Chroma and Paul Millman for that decision. Economic development in Vermont is a team sport and I am proud, once again, of the way that officials at all levels of government worked together on this effort.”

The total combined investment in the expansion project is approximately $22,000,000. A number of private and public financing tools were utilized including People’s Bank and VEDA financing, CDBG, New Market Tax Credits, Town of Rockingham, Vermont Rural Ventures, MHIC, USBANCORP and Vermont Employment Growth Incentives. “We are pleased to have developed the expertise at the BDCC necessary to engineer, assemble and managed the complex financial structure necessary to bring this project to completion,” said BDCC Director of Finance & Grant Management Bobbi Kilburn.

"The completion of this expansion project is a major milestone for Chroma,” said President Paul Millman. “Our original building was just twelve years old, but already no longer large or modern enough to meet the evolving needs of our global customer base. We were committed to staying in Bellows Falls and ultimately opted to expand at our existing location, despite the challenges it presented, rather than pursue options outside our community. While it took some creativity and compromises to make it work, we now have a modern, lean manufacturing facility; one that will allow us to continue to serve the scientific and medical device communities that made our growth possible as well as accommodate Chroma’s future growth for years to come."

About Chroma:
Chroma, an employee owned company founded in Brattleboro 27 years ago, reported 2017 revenues of $31.6 million. The company manufactures optical filters for the scientific, biomedical, photonics and imaging and detection industries. The filters and mirrors that Chroma manufactures are used in microscopes, DNA sequencers and clinical diagnostic devices, among other applications. The company has a worldwide customer base with established offices in Europe and Asia. The company recently opened up a new, 28,000-square-foot clean manufacturing addition to its Rockingham, Vermont plant.

About BDCC:
The Brattleboro Development Credit Corporation is a private, nonprofit economic development organization that serves as a catalyst for industrial and commercial growth throughout Southeastern Vermont, including Windham County and the towns of Readsboro, Searsburg, and Weston. BDCC serves as the State of Vermont’s certified Regional Development Corporation (RDC) for the greater Windham County area. BDCC is one of 12 RDCs throughout Vermont. For more information visit: https://brattleborodevelopment.com/