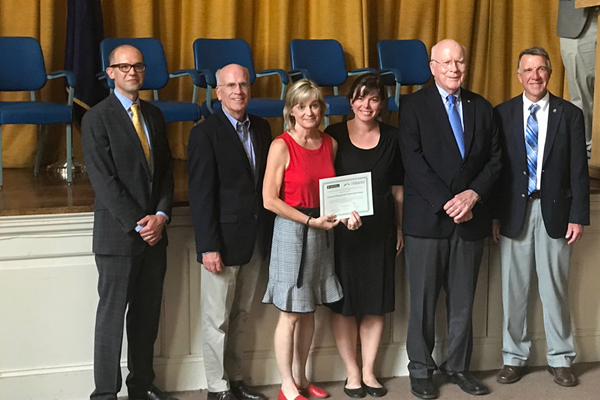 “The NBRC has quickly become one of the largest economic development tools we have in Vermont,” said Scott, who serves as State Co-Chair of the NBRC. “These grants help build critical infrastructure, expand our workforce, and strengthen our communities. Vermonters in nearly every corner of the state will feel the impact of these grants with projects like the creation of a new childcare facility in Alburgh, an improved water system in Randolph, outdoor recreation facilities in the Northeast Kingdom and the continued operation of a paper mill in Brattleboro.”

“These projects will ensure that rural areas have the same opportunities for success as urban areas and contribute to the economic wellbeing of our state,” said Leahy, who championed the NBRC’s $25 million budget as vicechair of the Senate Appropriations Committee. “Today we are also marking the first NBRC awards targeted to reviving our forest-based economy. Our region has an incredible asset in the Northern Forest, but we need to invest to ensure that Vermont communities can leverage that asset to create jobs and these funds will do just that.”

“Far too often, rural America is left behind when it comes to economic development, which is why the Northern Border Regional Commission is so critical,” said U.S. Sen. Bernie Sanders, who was represented at Wednesday’s announcement by a member of his staff.  “Providing federal funding for projects such as childcare, water infrastructure, and workforce development in some of the most economically challenged areas of our state will go a long way to help make these communities more resilient, healthy, and vibrant.”

“These grants will provide a vital boost to communities across our state that need it most,” said Welch. “By investing in projects from childcare to infrastructure, these grants will have widespread economic and community development benefits for Vermont communities.”

During Wednesday’s announcement in Springfield, Black River Innovation Campus Executive Director Trevor Barlow said the organization will use a $235,162 grant to repurpose the old Park Street School in Springfield into an entrepreneurial hub comprised of coworking space, apartments and educational space.  The project aims to build a digital economy ecosystem in Springfield by attracting tech-based start-ups and providing digital skills training.

“The NBRC looks forward to working with the 58 Economic and Infrastructure Development grant recipients across the four states over the next three years that are aimed at enhancing and aligning job skills with emerging businesses, improving rural communities and increasing the longevity and reliability of critical public infrastructure to support local businesses,” stated NBRC’s Executive Director Rich Grogan.

Created in the 2008 Farm Bill, NBRC is a federal-state partnership with a mission to help alleviate economic distress and encourage private-sector job creation throughout the northern counties of Maine, New Hampshire, Vermont and New York. Since its inception, the Commission has more than $56 million, which has leveraged more than $100 million to support 248 grants across the four states. In Vermont, including this year’s grantees, it has funded 72 projects totaling more than $15.6 million.